Albert, A.L.Ex, mYlez and Pyggy (as well as their real-life avatars Kory Mathewson and Piotr Mirowski) have so far performed in over fourty shows, and over ten academic and developer talks, including a keynote in Paris, fostering an interdisciplinary dialogue on theatre and artificial intelligence.

Edmonton, 16-26 June 2018
Piotr and Kory performed for together at the Edmonton Fringe Festival, selling out 4 out of 6 shows at the Studio Theatre on festival grounds, and receiving fantastic reviews: “Boundary-pushing science plus talented meatbags equals a standout improv Fringe experience.”

Brighton, 2-3 June 2018
Piotr Mirowski and Kory Mathewson came back to the Brighton Fringe Festival at
The Marlborough Theatre and Pub and got a great review in Broadway Baby (“This could be revolutionary”).

Leicester, 3 May 2018
Piotr (and Kory, remotely) gave a talk at the Phoenix Cinema during Art-AI, a two week festival taking place at Phoenix and Highcross and exploring the role of artificial intelligence (AI) in arts through a programme of creative work including installations, performances and discussions, organised by Prof. Tracy Harwood and co-curated by Luba Elliott.

London, 10 March 2018
Piotr and Kory performed a deeply atmospheric show at Geekeasy: Cults, with Katy Schutte operating the AI, Fred Deakin at the music and Jonathan Monkhouse at the lights and special effects.

London, 18 December 2017
12 Days of Christmas: Comedy Night Sharing the stage with Lesley Stone and Elaine Wallace from Up for it! as well as Raphael von Blumenthal, Piotr Mirowski performed as Albert and A.L.Ex at the Tristan Bates Theatre, London.

Paris, 7 April 2017
Piotr Mirowski did a short performance as Albert and A.L.Ex and then gave a keynote about “L’irrévérence artificielle: le théâtre d’impro avec un robot” at Devoxx France 2017 – one of France’s largest software developer conferences, held at the beautiful Palais des Congrès de Paris, in front of a crowd of nearly 2000 people.

London, 4 April 2017
Albert and Stephen Davidson organised again It Takes Two, a night of two-person improv, at the Wenlock & Essex pub, with guest acts: Two of Wands, The Happiest People on Earth, Gorilla Panic, The Just Us League and Doctor Twoprov.

London, 31 March and 1 April 2017
Albert, mYlez, Pyggy and A.L.Ex do their most ambitious show ever: binary2, transatlantic AI improv, simultaneously at the Tristan Bates Theatre in London and at the Curious Comedy Theater, as part of ImproFest UK 2017:

London, 19 February 2017
Albert and A.L.Ex were excited to be part of the Shoreditch Improv Festival at the Water Poet, which was brilliantly organised by City Impro!

London, 3 February 2017
The British Academy organised an exciting Late event, entitled “Love, sex and marriage… with a robot?”, with a mixture of fascinating talks about robotics and sexuality, as well as a few artistic performances. Those included the highly talented Impropera – literally creating beautifully sung opera extracts in front of the audience – and yours truly.

London, 18 January 2017
Albert and A.L.Ex, as well as their creator Piotr, had a show and talk about Artificial Intelligence for Improvised Theatre at the London Creative AI Meetup, organised by AI curator Luba Elliot. The show and part of the talk were recorded and you can refer to the slides for the details of how the AI behind A.L.Ex was built: a neural network trained on a processed version of OpenSubtitles, with a robot avatar from EZ-Robot, some improv lessons given by playing with an AI and the complexity of the actor’s work according to Stanislavski’s System.

London, 11 January 2017
Albert and A.L.Ex started the year with a new version of A.L.Ex! Using a small JD Humanoid robot from EZ-Robot, A.L.Ex is now an embodied artificial intelligence. Both shared the stage with the Parentheticals and Talking Dog and performed at the Bracket Racket at the Star of Kings.

London, 15 December 2016
Albert is invited to perform at Thursday Night Lights, the new improv show and jam at The Nursery Theatre:

London, 13 December 2016
Albert finds a friend, Stephen Davidson, with whom to co-organise a night of two-person improv! The first night of It Takes Two, which takes place at the Wenlock & Essex pub, is a success! Other acts include Two of Wands, The Happiest People on Earth and Stephen and Kit.

London, 16 November 2016
Albert & A.L.Ex comes back for a performance at the Hoopla Launch Pad at the Miller Pub.

London, 18 October 2016
Albert (aka Piotr Mirowski) participates in the Dialogue on Artificial Intelligence, organised by Dr. Shama Rahman from Jugular: Joining the Head and the Heart. Other panelists include a Professor of  Philosophy at Queen Mary University, a Professor of Cognitive Robotics at Imperial College, a Creative AI Producer, a Research Scientist in AI and a Principal at an AI think-tank. “A highlight from this evening”. 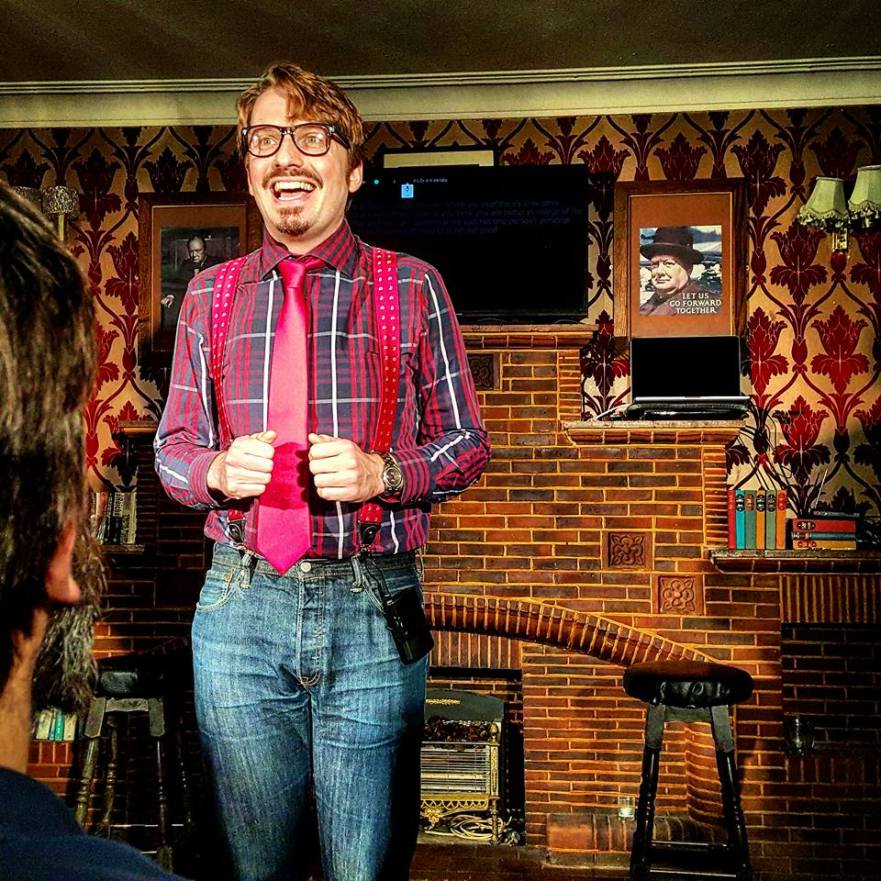